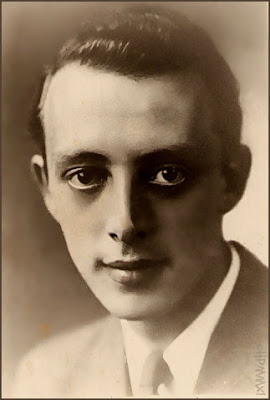 Kamiel Frans Jan Albert van Baelen (Turnhout (Belgium), August 15, 1915 - Dachau, April 11, 1945) was a Flemish novelist. He died in the Second World War as a resistance fighter at Dachau. KVB obtained in his own country the status of a promising writer who made ​​a cautious start to a tradition of experimental novelists in Flanders. He  built his work on the basis of several story-lines and fairy tales, but also using newspaper reports and stock quotes.This way he carried on The New Objectivity in the thirties. His debut as a writer took place some time before the war in 1937, with a children's booklet: "Brammetje knapt het op". The booklet was published under his pseudonym "Pro Pius". During the war his debut as a novelist started with the book "De Oude Symphonie van ons Hart". In Turnhout he became during these years involved in the resistance. He was arrested in 1944 by the Germans and deported to a series of prisons and concentration camps (see map). His last novel, "Gebroken Melodie" was never completed but was nevertheless published after the war in 1946. Translated and adapted from Wikipedia.

Kamiel Van Baelen is my great uncle on my father's side. My grandmother was his eldest and only sister. I became from an early age on fascinated by him and his unfortunate destiny, due to the many stories I was told. At later life I read all his work and research on him and began to understand and appreciate even more this mysterious man, who's life and writings were abruptly aborted by the tragic WWII. He lived to be not even 30, but had a rich life behind him, packed with sudden changes, adventure, love and of course tragedy. 2015 will a commemorative year, because then it will a hundred years ago when he first saw the light on August, the 15th 1915 -astrologically a real Leo with a dark side- and strangely enough born on Assumption Day. This blog is dedicated to him and will take up some time to accomplish. The dead line is August, the 15th 2015. Posts are mainly in English, some times, for obvious reasons in Dutch. First of all here's his obituary or death prayer card really ("doodsprentje")...